BY Annemarie LeBlanc on May 13, 2011 | Comments: one comment
Related : Jersey Shore, Snooki, The Situation 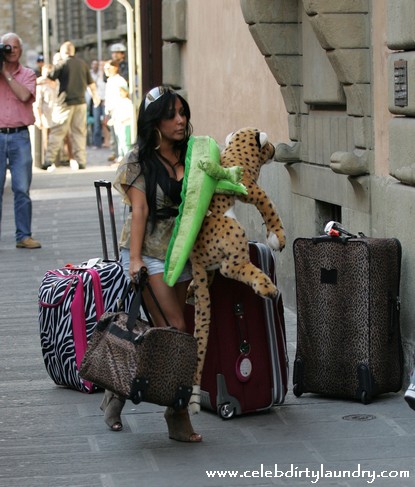 Deanna Nicole Cortes, Nicole Polizzi aka ‘Snooki‘, Sammi Giancola, Jenni Farley aka ‘JWoWW‘, Vinny Guadagnino, Ronnie Ortiz-Magro and Michael Sorrentino aka The Situation the ‘The Jersey Shore’ cast arrive at their town house in Florence, Italy to begin filming the fourth season of the popular reality show May 13th, 2011.

The cast will be living in Florence just outside famed Piazza del Duomo.  Even though Jersey Shore has been mega popular in America the Italians are less than thrilled about their arrival in Italy and are terrified about how they are going to behave.  A spokeman for the city said, “We needed to have some general rules on behavior in place.  US universities with study centers here are not very happy. They’re afraid people will start drinking too much.”