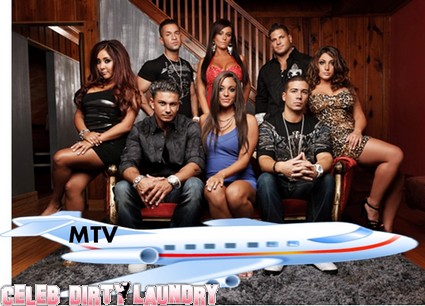 Everyone is relieved that the Jersey Shore cast won’t be missing the MTV Video Music Awards to be held tonight.

Millions may be swamped by Hurricane Irene on the East Coast but our gang of goombas was whisked to safety and L.A. on a private jet hired by MTV.

‘Jersey Shore’ is the number one hit on MTV – their biggest money maker – and there is no way they would depreciate the value of their VMA show by not having the classless caste attend.

“I was nervous. This storm’s no joke,” Paul “Pauly D” DelVecchio told MTV News.   “I hope our shore house doesn’t blow away,” said Snooki on Friday via twitter.

“Our prayers go out for everyone on the East Coast,” Vinny said. “We’re looking out for them, but I think they’re going to be all right.”

There you go – that’s the weather report from ‘Jersey Shore.’