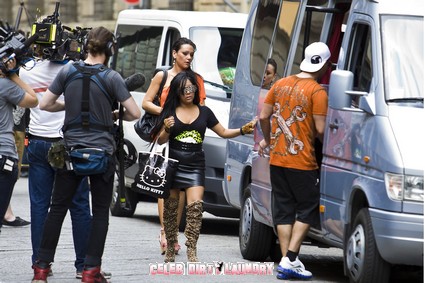 It looks like Jersey Shore is ready to shed its original skin and start fresh.  Fans will only have two more seasons left to get their fill of of Snooki, JWoWW and The Situation.  According to reports, MTV plans to recast the top rated reality show after the original crew films one final season in Seaside Heights this summer.

“After this group comes back from Italy and shoots season 5 this summer, that will be the end for them,” a source says.

The primary reasons for the recasting are the high salaries and outside commitments that the increasingly popular group enjoys.  The new cast will be “a lot cheaper,” but that the current stars “will leave on a high note.”

With each passing season, the ‘Jersey Shore’ cast holds out for a bigger pay raise, arguing they miss out bringing in the big bucks from sponsorship deals and club appearances they can’t do while filming for MTV.

Although agreements for salary and other conditions were worked out for Season 5, it seems like MTV has had enough with the cast’s high demands and has decided to start over with a new group of urban trailer trash.

MTV can then make another group of losers into superstars.  Fame is valuable, regardless of the complete absence of any talent on the part of the famous – just look at Kim Kardashian or Paris Hilton – Snooki is no LESS talented than those two.