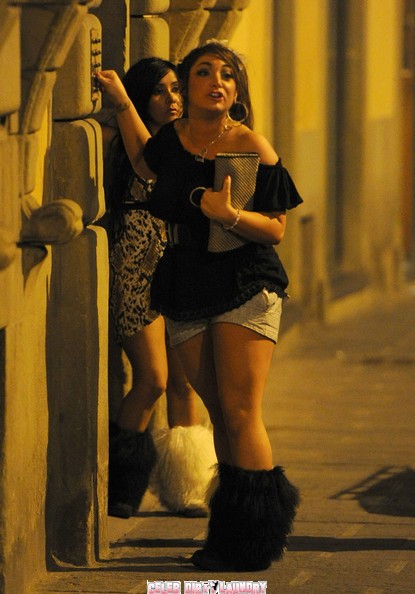 The Jersey Shore cast has invaded Florence and they are filming season 4 of their reality show.  Florentines were worried that the hard-partying young adults would be a problem and it looks like they were right.  The Jersey Shore cast arrived home last night (June 11th, 2011) after an evening of clubbing in the city centre.   Sammi “Sweetheart” Giancola, Ronnie Ortiz-Magro, Mike “The Situation” Sorrentino, Paul “Pauly D” DelVecchio, Vinny Guadagnino, Jenni “JWoww” Farley and Nicole “Snooki” Polizzi looked a little worse for wear but they entered their house without incident.

Cast member Deena Nicole Cortese appeared still drunk from earlier in the day, and was ranting and raging at the locals who had gathered to watch the cast arrive back.   She shouted at them ” I hate you f**king Italians, and i hate your f**king city”. When Deena joined the cast she described herself as “class in a glass and party in a body.” She had one part right but class – the girl is disillusion!  She is an embarrassment – deport her quick!

It looks like Florence Mayor Matteo Renzi was right when he thought the Jersey Shore cast would be a headache for the city.  What do you think of Deena’s drunken rant?  Celeb Dirty Laundry wants to know!

Click on the thumbnails below to see 30+ more pics of the cast returning home from a night of partying!