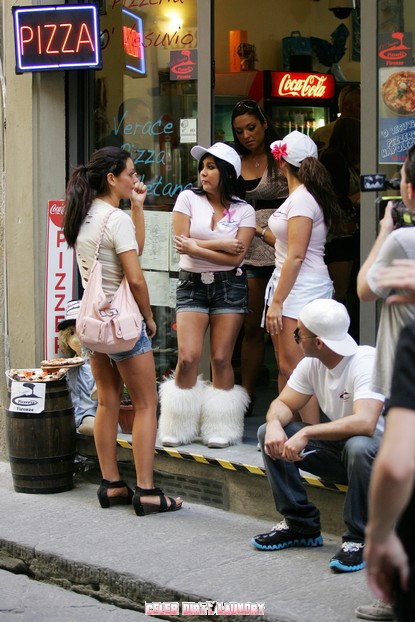 The Jersey Shore gang has invaded Florence, Italy and is filming a season of their hit MTV show on location there. Needless to say controversy has followed the gang overseas and Florentines in high places are worried that the hard-partying young adults will somehow damage the reputation and perhaps the important tourist trade of their beloved city. There is also a snob factor at play here – Florence fancies itself – legitimately – as one of the great centers of Western culture – and nobody, except maybe one of the casts’ parents or MTV’s bankers, could credit the Jersey Shore crew with adding to Western culture.

Snooki’s recent fender bender – with a police escort vehicle – would seem to typify the sort of incident that the Italians fear.

Nevertheless, how much of a serious problem can it be to have a show like Jersey Shore filming in Florence? After all, it is not as though Italy hasn’t seen its share of gross behaviour – from Mussolini to soccer hooligans to organized crime, Italy certainly is not now, nor has ever been, heaven on earth. Are the big shots in Florence just being typically anti-American?

Looking around the net I took four posted comments that I thought were funny and representative of the differing points of view on Jersey Shore in Florence:

“I think the Italians are just being hypercritical and anti-American. They have tens of thousands of Libyans coming ashore and they are complaining about the Jersey Shore bunch? Get real. Italy should be proud that MTV chose their backward country to film a season in. The JS crew is actually adding a little class to the place.”

“I am so sick of yous (sic) site and others like it bashing the cast. What exactly are they doing wrong? They are young, good looking kids who are going out and partying. You can be fake online all you want, i know its cool to jump on the hate wagon, but tell me this: If mtv paid you 100K+ an episode to go to Italy, get drunk and party, what would be your answer? Stop hating on them for doing something you wish you could do.”

Against The Shore Comments:

“Da Vinci. Michelangelo. Galileo. Is anyone surprised that the contributions made by these men and the ‘centuries of culture’ they brought to their country has been flushed down the toilet by these greaseballs in less than a month? These walking petri dishes have done more damage to the Italian reputation of quality than Fiat and Steve Buscemi combined.”

“It may be possible that someone idolizes greased up drunk fat chicks that resemble bloated carrots. I honestly hope that your self respect is worth more than whatever they are being paid. A whore is a whore, the rest is price negotiation.”

Are the Italians making much ado about nothing?