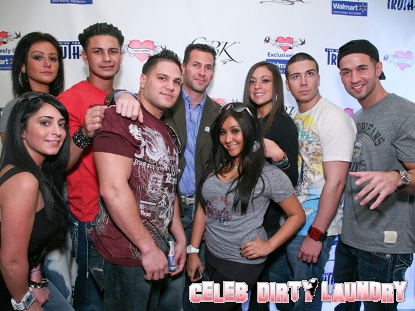 Hi, SNOOKI ! It’s been way too long without you, my favorite lil’ orange oompa loompa friend. “Do you think they sell eyelashes in Italy?” she asked, sincerely fearful of the prospect of not being able to purchase fake attachments. For you, Snooks, yes. We’ll find you your eyelashes.

So, basically, the show started out with them all declaring how they want to find themselves some classy Italians to get together with. Huh, that’s funny. And here I was thinking that they were all heading to Italy to soak up the rich culture. Though, Snooki basically said the only thing she knows about Italy is that it’s in “the shape of a boot.” Therefore, I don’t expect the Uffizi Gallery to be high on her list :)

The cast said goodbye to their families and headed to the airport with their bags. Here they come, Europe! [As of that point, there weren’t many fist pumps].

The guys and gals took separate flights. The girls arrived in Milan, not their desired destination. While at the airport, Snooki wanted to know where she could exchange her U.S. currency for pesos *sigh* and Deena was stressing over something having to do with bronzer.

The boys were super excited. They’re the first to arrive at the house, which is a converted bank vault.  I’m not gonna’ lie, the house is pretty nice. Pauyl D and Vinny roomed together, which left Ronnie and The Situation roommates. Not long after, Vinny discovered the bidet — he was a little too excited about that whole setup.

The girls arrived last and employed the boys’ help to bring in their luggage — like a million bags.

Pauly D almost had a hairdryer disaster. But, never fear! He brought extras, ones varying in voltage-usage to make up for the European power situation.

After a few shots and more guido-rific stylization, the cast took to the streets of Florence. Snooki was super-duper excited after she spotted a “Ferris wheel” (which was actually a carousel).

The next morning, they woke up STARVING. They couldn’t  read the map. They didn’t know where to go. And they only have stick shift cars to drive; no one except Pauly and Snookie “know” how to drive stick. Snooki decided to drive the girls. . .and I think we all know what that’s going to lead to in the future (can you say “CAR CRASH?”).

The boys hit the gym. Snooki did some sit ups (Snooki style of course) in the house. Soon, everyone started to get ready to hit the night scene. More hair dryer and hair straightener malfunctions. Deena accidentally burned off part of her hair — or, weave, rather. Woopsy.

Meanwhile, The Situation told Ronnie a secret . . . he and Snooki hooked up in Jersey. They were drunk and, you know, did Jersey Shore Things. The Situation made Ronnie swear that he won’t tell anyone about this. (But, by the end of the show, it’s not like it’s a MAJOR secret anymore).

The cast heads out to the clubs for the first time while in Italy. It’s a pretty hip happenin’ club. The Sitch makes a move on some girl who doesn’t speak a lick of English. The night progressed and . . .

The Sitch kissed Snooki. In. Front. Of. Everyone. *mouth drops*

Did you watch the Jersey Shore premiere? If you did, let us know what you thought in the comments section below!