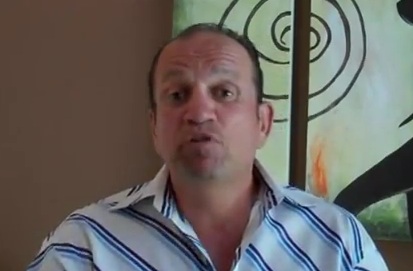 Jersey Shore’s Mike ‘The Situation’ Sorrentino‘s douchebag dad Frank Sorrentino has challenged famewhore Lindsay Lohan‘s dad Michael Lohan to a duel with pistols at 10 paces to defend the family honor.  Seriously though, Frank has challenged Michael to a fight in another utube rant.  He is claiming that Michael disrespected him and his son and insulted the family honor.  Frank is feuding with his famous offspring The Situation, as a matter of fact The Situation is said to be suing his father.

In his usual eloquent manner Frank took to his personal account on YouTube to warn Michael. He said, “I heard Michael Lohan passed a comment on me, or about me regarding my boy and that he wants to fight me. Hey Mike, let me send you a f**kin’ message so you get this f**kin’ loud and clear, okay? You should be careful what you ask for because you may get it..

The video is below and there are a lot of cuss words going on in it.   I think Frank is a wannabe Soprano LOL.  Every second word he drops F-bombs.  (see the video below) Neither of these guys is winning father of the year, but they might very well win douchbags of the year.   Maybe Lindsay and The Situation will get lucky and the two will kill each other.    So who is the worst father Celeb Dirty Laundry wants to know.  Let us know in our poll below.