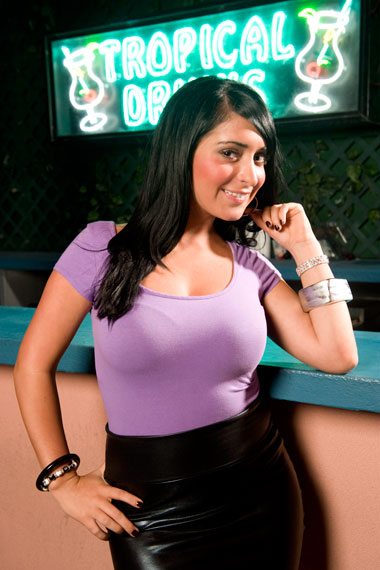 Angelina Pivarnick from Jersey Shore has been hit with a lawsuit by Melissa Mayne – Melissa is also suing the Trump Taj Mahal Hotel and Casino where the alleged assault took place.

Melissa Mayne claims she was leaving a nightclub at the Trump Taj this past December, when she crossed paths with Angelina who was there to participate in a Celebrity Boxing match.  Can you imagine – Angelina with her multiple boob jobs, liposuction, and other forms of cosmetic surgery trying to box?

In her lawsuit, filed in New Jersey, Melissa claims Angelina grabbed her, struck her in the face, threw a glass in her face and threw her cell phone across the room.  Melissa claims the entire assault occurred in front of Trump security guards who did not intervene or “even attempt to stop” Angelina – of course not – they must have thought it was part of the show!

Poor Angelina said she feels she was “set up,” saying “that night I feel I was provoked, taunted, and harassed into a fight.”

Dear Angelina – the point is that you are not allowed to touch other people in anger just because you are upset.  Being a big new celeb Angelina better learn to control her emotions, at least when in public.