Jersey Shore’s In Italy On Site Production Delayed – The Italians Don’t Want Them! 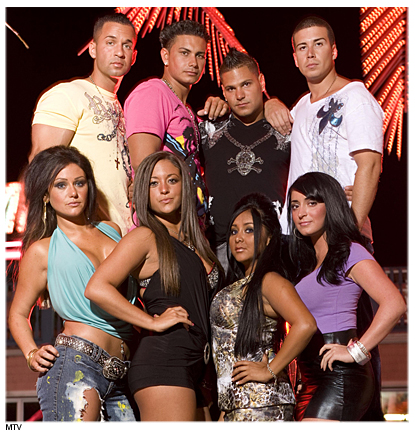 Looks like the ‘Jersey Shore Takes Italy’ invasion has been postponed at least a month.  Showing impressive good taste all of the best hotels and nightclubs have declined permission to have the Jersey Shore cast and MTV perform and film at their venues.

Furthermore, the greedy cast members are in the midst of contract dispute – “Several of the housemates haven’t signed their contracts and until they do, the cast can’t go to Italy,” a production insider revealed.

“Producers are also having a really difficult time finding venues for the cast to party at too.”

Florence, the regional capital of Tuscany, has been chosen as the cast’s base.  Said the source: “The cast was meant to leave on April 18, but now with the contact troubles, they won’t be leaving until May.”

Snooki, The Situation, JWoww and Pauly D have refused to film until more lucrative contracts are hammered out.  Italy is said to be up in arms with the impending arrival of the MTV show, even though it didn’t begin airing there until last week.

“They embody the worst stereotypes of Italians, multiplied by thousands and Americanized,” one newspaper columnist lamented.  “The good news, if there is any, is that producers have chosen one of the prettiest cities in Italy for the cast to live,” said the source.