Jersey Shore’s Snooki & Deena Get Wasted On The Boardwalk – Photos 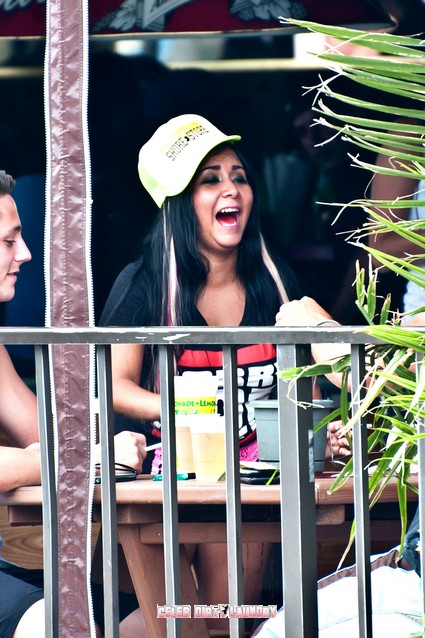 Jersey Shore’s Nicole ‘Snooki’ Polizzi and Deena take a break from working at the Shore Store where they are working this summer and spend a couple hours drinking at EJ’s on the Seaside Boardwalk Seaside Heights, New Jersey on July 22nd, 2011.  Of course in Snooki’s usual style the orange midget looks like she is totally wasted.  The cast has only been back in the U.S. for a couple of weeks and Snooki is already causing havoc.  Why am I not surprised?

New Jersey is having a heat wave and temperatures to 100 degrees or higher this afternoon, shattering records I guess Snooki needed to cool off a bit.  Maybe she should look at the pictures of her wasted and she just might just sober up!

Meanwhile Beavis and Butt-head are returning to MTV this fall.  At Comic-Con they previewed the show and best part of the show is that Beavis and Butt-head watch Jersey Shore.   In the small segment  the two rip Snooki apart and it is hilarious.  I think I just may start watching the show!

Click on the thumbnails below to enlarge 11 more pics of Snooki and Deena!