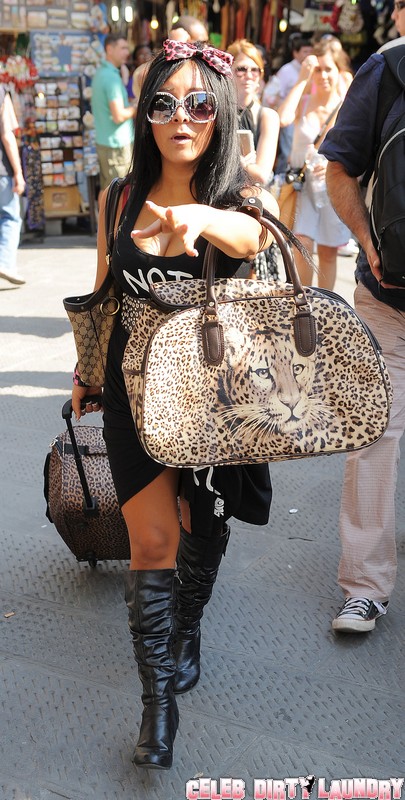 The Jersey Shore cast are living in Florence, Italy filming the fourth season of their popular reality show.  They are  living in Florence just outside famed Piazza del Duomo.  The Italians were less than thrilled that they were coming to Florence and even gave them rules on how they were expected to behave.  I wonder how the Italians are going to feel about today’s incident with Snooki.

Nicole “Snooki” Polizzi was driving and Jenni “Jwoww” Farley was a passenger when Snooki rammed into a police car.  I know what you are thinking – she was drink again, but no apparently no alcohol was involved.  At least according to people connected with the production of Jersey Shore.  If she was drinking we will know soon enough.  She will get her sorry butt kicked out of Italy!

TMZ has more, A witness said Snooki smacked her into the back of the patrol car, wedging her ride between the car and a highway protection wall. The witness says JWoww was with her at the time of the crash — and when she tried to exit the car, she had to go through the window … because the door was blocked by the wall.

I bet MTV and the production crew of Jersey Shore are praying no alcohol was involved.  What a thing for her to hit a police car!

Click on the thumbnails below to enlarge to see more pics of Snooki and Jwoww!