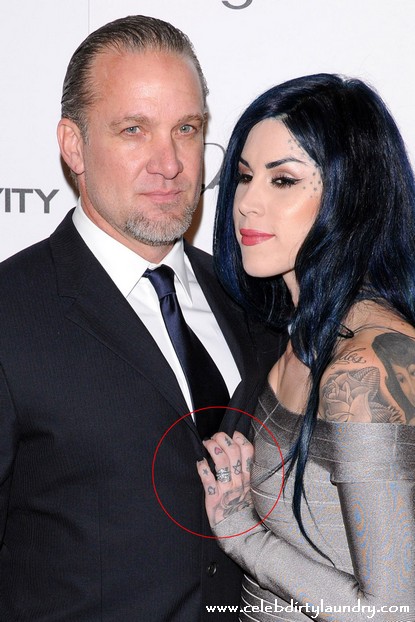 Jesse James says he would forgive his fiancee Kat Von D if she cheated on him.  The motorcycle enthusiast was dumped by ex-wife Sandra Bullock in March 2010, just days after her Best Actress Oscar win, after it was revealed he had been having an affair with tattoo model Michelle ‘Bombshell’ McGee and had slept with several other women.

But Jesse insists he would be more forgiving if tattoo artist Kat – who he has been dating since August 2010 and got engaged to in January 2011 – was unfaithful to him.  Let’s hope that the creep gets the chance.

In an interview on Howard Stern’s SiriusXM radio show on Wednesday (06.05.11), he said: “If she cheated on me, I would forgive her and still love her.”

During the candid interview, Jesse also revealed that Kat was a better lover than Sandra.  When quizzed by the shock jock on who was more “fun in bed,” the ‘Monster Garage’ host replied: “That one’s an easy no-brainer. It’s Kat 100 percent . She’s a vixen.”  “The way she, like, gets in my head and makes me feel – it’s a mental thing. We’re just connected on a whole different level.”

Jesse – who has claimed in his new memoir ‘American Outlaw’ he felt trapped in his marriage to the Hollywood beauty and committed his adulteries to find a sense of “freedom” – said: “Not anymore, man. I’m devoting my life to this chick and she’s rad.”

“I did all the hard work on myself in rehab and therapy and, for the first time ever, I love myself and feel like I accept myself for what I am. I’ve forgiven myself for what happened and now I can actually love someone and be in a relationship.”

Jesse James must be in the running for A**HOLE of the year – so far he has my vote.