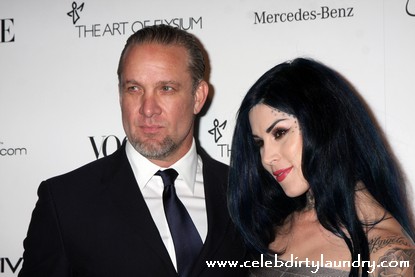 Jesse James claims to be determined not to embarrass or hurt Sandra Bullock while he promotes his book ‘American Outlaw.’ However the lowlife Lothario has done quite the opposite by telling Howard Stern that his current love Kat Von D is a better sexually than Sandra Bullok was.

He also blurted in other interviews that he hasn’t seen his adopted son, Louis, “since everything” went down and that he’s finished worrying about his ex-wife.

“He has got nerve going on TV and moaning that he has spent the last five years worrying only about Sandra when we all know the only person Jesse ever thinks about is himself,” a friend of Sandra’s says.

This apparent disregard for Sandra’s feelings is “typical Jesse,” the friend says. “But what’s different this time is he can’t hurt her anymore.”

When ABC asked Jesse if he thought getting remarried so soon would be hurtful to Sandra, he replied: “I can’t worry about her anymore. I think I’ve spent a good chunk of the last five or six years worrying only about her, and what she thinks, and what I should do … controlling all my movements and everything else … I think it’s time to worry about Jesse and making sure Jesse’s happy.”

Considering Jesse’s multiple affairs while married to Sandra its hard to believe he was doing his best to make the relationship work – or maybe that was his best and he is just a sociopath.

‘American Outlaw’ is Jesse’s account of what Sandra and the world found out shortly after she won the Oscar and adopted a baby boy, Louis: that he was a chronic cheater during their seemingly blissful marriage.

In addition to his interview with Good Morning America and Nightline Jesse spoke to Howard Stern on Wednesday morning about his sex life with Kat. Jesse said he’s with Kat and it’s like nothing he’s ever had. He said she’s more of a match to him on every front.

Some outlets have reported that Jesse said Kat was “100 percent” better in bed. Jesse describes Kat as “like 100 percent the first woman that I’ve ever trusted … 100 percent, I’ve met my match with her.”

“He’s learned nothing,” the insider tells me. “He says that he has forgiven himself and moved on, but obviously doesn’t give a damn about others forgiving him. If he did he wouldn’t be reliving this ugly time again to sell a book.”

My source adds defiantly, “Sandra won’t be reading the book and if you want to make sure this man doesn’t get financially reward for bad behavior I suggest no one else read it either.”