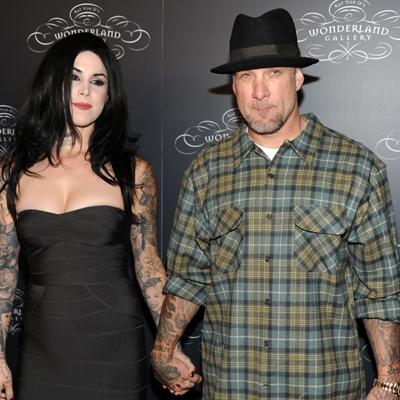 Jesse James’s divorce became final from Sandra Bullock in June 2010.   After the much publicized split-up Jesse was America’s most hated man for breaking Sandie heart by cheating at least four times.   News has been released today that Jesse, 41,  has gotten himself engaged to Kat Von D, 28.  He sure did not let the moss grow under his feet!  Jesse and Kat a tattoo artist have been dating since last summer.

“You know sometimes the public and press gets it wrong. This is one of those times. 2010 was actually the best year of my life because I fell in love with my best friend. An amazing woman who stood behind me when the world turned their backs,” James tells PEOPLE exclusively. “I have never met anyone so kind and loving and committed to making the world a better place every day. My love for her is beyond description. So honored that she said ‘yes.’ Growing old with her is going to be a f—-n’ blast!”

I threw up in my mouth when I read his statement.  All I can say is good luck Kate Von D.  Remember Jesse cheated at least four times on Sandra.  Hope he does not do the same with you.  I give it a couple of months at best!