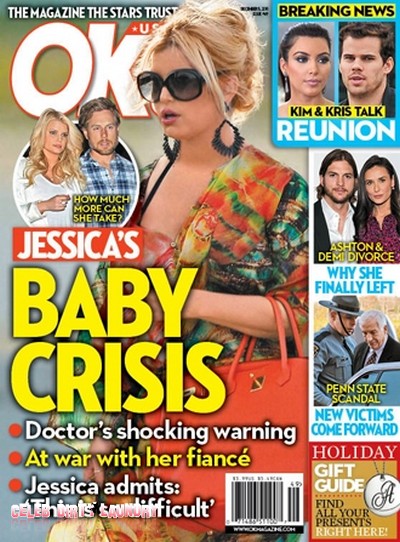 The current issue of OK Magazine features the cover story ‘Jessica’s Baby Crisis.’  Jessica Simpson, 31, took to her twitter account October 31st, 2011 to confirm her pregnancy.  She tweeted pictures of her dressed as a mummy with the message, ‘It’s True! I am going to be a mummy!’

The magazine is now reporting that Jessica has had a baby crisis and she has been giving a warning by her doctor to take it easy.  She is also rumored to be at war with her fiancé Eric Johnson.  Rumor has it  he wants a whopping 1/2 of her fortune which not only includes her singing career but part of her fashion empire.

OK! has more: “She’s said it’s been a difficult pregnancy — she’s been dizzy and nauseous,” a friend of the singer-entrepreneur tells OK!. Adds another insider: “She was totally unprepared for how hard it would be on her body.”

Also included in this week’s magazine they claim that Kim Kardashian and Kris Humphries are considering a reunion.  Kim filed for divorce from her hubby Kris after a scant 72 days and left him blindsided.  If Kim is thinking about reconciling with Kris it can only be about one thing money or perhaps Kim does not like her new title as ‘America’s most hated women’ LOL.

If you want to find out all this and more, pick up the current issue of OK! Magazine!