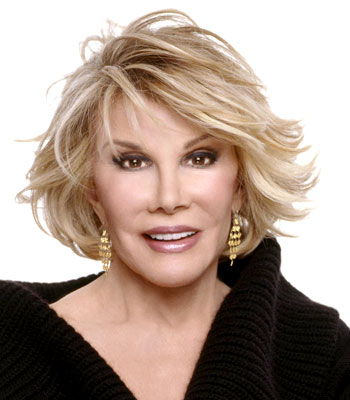 Joan Rivers, 77, known for her brash manner and and not mincing words was very verbal about her feelings for Sarah Palin and the  criticism and blame she has received for the shootings in Tucson, AZ where Congresswomen Gabrielle Giffords was hot and six people were killed.  Joan was speaking at the Critics’ Choice Awards to TMZ.

TMZ  further reports:  Rivers pointed to content on Palin’s website that the stand-up says encourages violent behaviour “This woman is just stupid and a threat.  She should “go to another planet… and get out of our face”.

Yikes there goes Joan again :-)  Would love to see a cat fight between the two of them – can you imagine.  Joan is a tough one – my money might be on her LOL