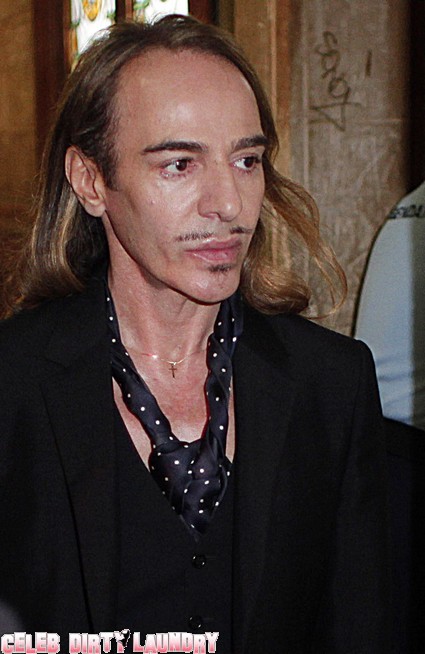 Well the verdict is in and there can no longer be any doubt that former Dior fashion boss John Galliano is a racist pig. The 50-year-old fashion designer was found guilty of “casting public insults based on origin, religious affiliation, race or ethnicity” following two incidents in a Paris bar.

For his anti-Semitic and racist attacks John had faced a jail term of up to six months but instead received a slap on the wrist – a fine of 6000 euros with payment suspended. But the sentence is not really the point here – Galliano has now been formally and legally shown to be a disgusting racist. Hopefully the entire fashion industry will give this vicious racist a wide berth.

Galliano was not at the Palais de Justice in Paris to hear the verdict no doubt preferring to avoid the negative publicity.  The charges against Galliano were comprised of an attack on 35-year-old museum curator Geraldine Bloch which took place in February and another attack last October. Galliano claimed that he was innocent of all charges but upon seeing the overwhelming evidence to the contrary the judges naturally disagreed.

During a day-long trial in June, he said he had been drinking champagne and taking Valium pills “like they were candy” on the day he accused Bloch of having a “dirty Jewish face.”

Trouble had broken out in La Perle, a bar in the Marais district of Paris, on February 24, when Galliano began insulting Miss Bloch, the court was told.

Bloch said she suffered a 45-minute tirade during which Galliano also accused her of having “revolting eyebrows, low-end boots and low-end thighs.”

As her partner, Philippe Virgitti, 41, intervened he was called “a dirty Asian shit.” Galliano also implied the Frenchman was an “illegal immigrant.”  Galliano told the court he could only remember Virgitti preparing to attack him and police arriving.

Asked if he recognised the words attributed to him, he replied: “I can’t remember. I have no idea, I’m afraid.”

Fatiha Oumeddour, 47, who was not in court, told police she had been called a “f****** ugly dirty Jewish bastard” at the same bar in October last year.

After the allegations, a video was discovered of Galliano telling two Italian women their ancestors should have been “gassed” and “I love Hitler.”

After the video was played in court, Galliano himself said: “They’re not views I hold or believe in. In the video I see someone who needs help.”
Galliano’s lawyer, Aurelien Hamelle, told the court: “Some things may have come out of his mouth that didn’t come from his brain.”

Galliano actually had the gall to make the following statement: “All my life I have fought against prejudice and discrimination, having been subjected to it myself. These are not the sentiments of John Galliano.”

If they are not Galliano’s sentiments that whose are they?