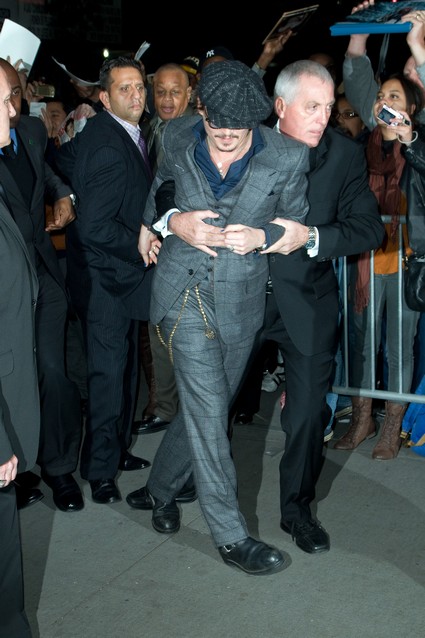 Johnny Depp’s bodyguards are paid to protect him but one assumes that they have some training – so that they don’t go crazy on a disabled woman who strays too close to Depp and wind up sending her to hospital. Robyn Ecker, 52, has filed a police report alleging she was tackled to the ground by a security guard who was minding Depp at an Iggy Pop concert at Los Angeles’ Palladium on Thursday night.

Ecker claims the unnamed bodyguard grabbed her wrists and forced her to the ground after she accidentally got too close to the star, who was seated beside her.  She was subsequently admitted to hospital to treat her injuries and filed a police report about the incident.

TMZ has the scoop:  Johnny Depp’s hired muscle put a handicapped woman in the hospital Thursday night — this according to a police report filed by the woman in question.

Law enforcement sources tell TMZ … 52-year-old Robyn Ecker filed the report claiming she was celebrating her husband’s birthday at the Iggy Pop concert in L.A. — treating him to $600-a-pop seats at the Palladium … and Johnny was seated right beside her, surrounded by bodyguards.

Ecker claims she was having a blast, dancing her face off … when she accidentally strayed a little too close to Johnny’s table.

According to Ecker, Depp’s bodyguards pounced on her out of nowhere — grabbing her wrists and wrestling her to the ground. Soon as she regained composure, Ecker says she left and got herself checked out at the hospital.

Ecker’s assistant tells TMZ, Robyn and her party had been drinking during the evening. Law enforcement sources tell us, Robyn appeared wasted when she made the report.  Attempts to reach Depp’s people were unsuccessful.

Even if Robyn was drunk, professional bodyguards should be able to do their job without sending innocent people to the hospital. Johnny Depp is just another person – with no more right to safety than Robyn Ecker. If Johnny boy wants to go to an Iggy Pop concert then his bully boys need to realize that there might be a little partying going on – so they need to temper their violent instincts if a fellow concert goer gets a little bit too close to their precious cargo.

What is your opinion about bodyguards getting unnecessarily violent with innocent people? Let is know in the comments below.