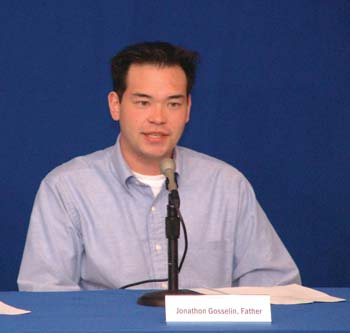 Jon Gosselin has returned to the workforce as a rep in sales and marketing.  His ex-wife, Kate Gosselin is making $250,000 per episode of ‘Kate Plus 8’ – she uses those children as her meal ticket as surely as if they were livestock.

Jon can’t seem to get the courts to agree to stop Kate and TLC from filming the children who he claims are exhibiting all sorts of behavioural problems as a result of being filmed all of the time and enduring the tension of constant work.

The question that immediately comes to mind is whether Jon’s primary concern is for his children or is he simply overwhelmingly jealous.  When he had a say in things those kids were on camera just as much as now.

In any case magazine ‘Life & Style’ has the following press release:

Reality star Jon Gosselin is swapping TV stardom for your typical 9-to-5 gig. “Jon’s working for Global Green Property Services,” which helps properties become more environmentally friendly, an insider tells Life & Style. “He’s doing sales marketing, which means he goes out to companies or cold-calls them and tries to get them to use Global Green. It’s a modest job – he doesn’t get a huge salary.” While Jon, 33, is making the rounds in Pennsylvania to help earn cash for his eight kids, his ex-wife, Kate Gosselin, is earning money through her reality show with the kids. “Jon doesn’t long for fame at all,” says the insider to Life & Style. “He’s much more content blending in and being able to live his life without the world watching.”

To us it all sounds more like a big case of sour grapes – Kate’s getting the money.