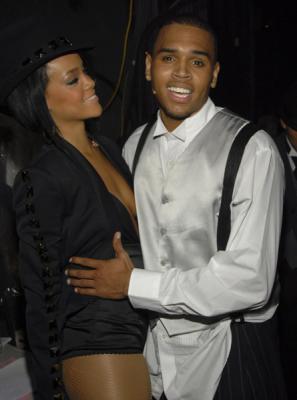 Rihanna’s restraining order against ex-boyfriend Chris Brown was relaxed by a judge yesterday and allows the singer to be near Rihanna and even speak to her as long as he doesn’t annoy or harass her.

Under the amended order Brown had been required to stay at least 50 yards away from Rihanna – or 10 yards at entertainment industry functions – as part of his sentencing for assaulting her in 2009.

Rihanna’s lawyer Donald Etra told a court hearing that his client gave her blessing to the changes. ‘I have spoken with my client and she does not object to it being modified to a level one order,’ he said.  The level one order means Brown, 21, and Rihanna, 23, no longer have to stay 10 yards apart if they attend the same awards ceremonies.

‘I am approving the order,’ Los Angeles Superior Court Judge Patricia Schnegg told Brown.  ‘You can’t annoy, molest or conduct surveillance of the person on the order,’ she infomed Chris.  Brown was sentenced to five years’ probation, ordered to complete more than 1,400 hours of community service and slapped with a restraining order after he admitted assaulting Rihanna in the early hours of February 8 two years ago.

Brown handed himself in to Los Angeles police following a fight with his then-girlfriend inside a rented Lamborghini in Hollywood.  Police notes from the scene reportedly stated that Brown punched, bloodied and threatened to kill Rihanna.  The incident forced Rihanna to pull out of her Grammys performance, which was due to take place just hours after the attack.

Brown, who pleaded guilty to one count of assault with the intent of doing great bodily injury, also had to complete a domestic violence counseling course as part of his sentence.

He completed the 52-week course in December last year and has received glowing reviews during his probation progress report hearings.