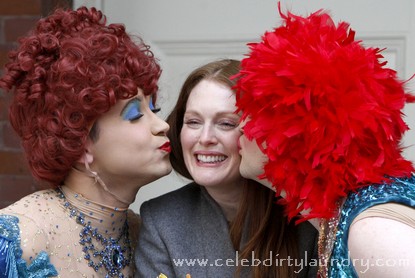 Julianne Moore, 50, was named Woman of The Year by Harvard University’s theatrical Hasty Pudding fraternity.  The award is an annual tradition.  The fraternity awards a Man and Woman Of The Year,  last year’s award was given to Anne Hathaway.   The winner usually gets a parade and a roast but this year they had to cancel the parade because of all the snow.  The Hasty Pudding Theatricals is one of the oldest college theatrical societies and they are known for their musicals and burlesque performances.

Julianne was dressed conservatively in black while the same cannot be said for the all male group dressed in drag and heavily made up with makeup.