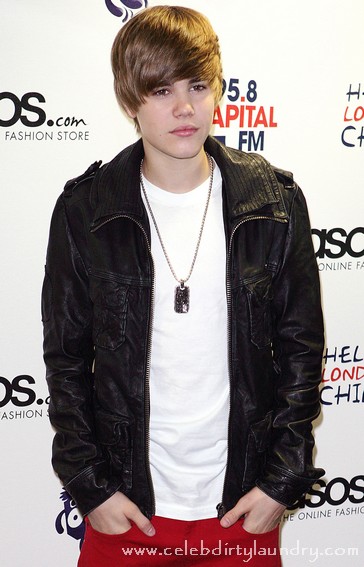 Justin Bieber got into a fight with Jimmy Kimmel and a pair of scissors on the ‘Jimmy Kimmel Live’  show this week.

The teenager was a guest on Thursday’s episode of the ABC show when Jimmy said he had been running a Twitter competition asking fans to submit possible song titles for a duet between the pair.

He said one possibility was ‘Jimmy Cuts Justin’s Hair’, before saying: “I was thinking instead of us singing the song it would be fun if I actually did cut your hair.”

He then produced a big pair of scissors and moved behind his sitting guest. “Did you actually take some off?!” shouted Bieber.  Kimmel then suggested it would be more fun to shave his entire head, which Bieber agreed with.

When the show returned from commercial break, the host was holding a razor and standing behind an apparently bald Bieber (who of course was only wearing a skin-coloured cap).  Kimmel thought Bieber looked like a young Lex Luthor, while Bieber compared himself to Michael Jordan.  Michael Jordon?

“Maybe people will stop focusing on your hair now,” suggested Kimmel, to which Bieber said: “They’ll just focus on my beautiful, silky-smooth vocals!”

As for how his female fans would react, the ‘Baby’ singer joked: “I think the girls will be upset but they’ll get over it!”

Bieber was on the show to promote his debut movie Never Say Never, which opens today.