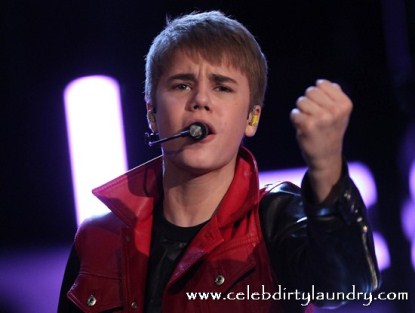 When Robert Pattinson was cast in the Twilight Saga, critics were stunned by how convincingly the British actor played the role of the brooding bloodsucker and it seems as though his portrayal was so good that upon meeting him 17-year-old Justin Bieber was easily convinced that Rob is actually a real vampire!

Justin is a huge fan of the vampire franchise, using his fame to pull some strings in his native country of Canada where he paid a visit to the movie’s set and hung out with Rob in his trailer.

Allegedly this is where a stricken Rob, looking pale (due to the film’s talented make-up artists), grabbed JB by the arm and confessed to being a real vampire.

Justin is said to have been so taken aback by the confession that he broke into an impromptu version of his song Speechless as a way to cope with the news.

Sources close to the One Time star have revealed that despite being presented with medical journals, the theory of evolution and a chart showing Rob’s heart beat and blood type, Justin is still adamant that Rob is a creature of the night.

In Justin’s world, where going from being a poor kid living in a basement dump with an ex-junkie single mom, to mega stardom and multi-millions overnight, being a real vampire just isn’t that unbelievable!