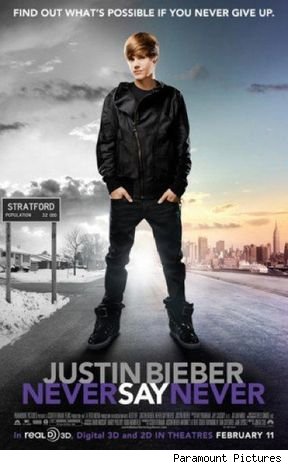 Justin Bieber’s 3D biopic movie follow-up to his new book is called ‘Never Say Never’ and hits theaters February 11th, 2011.   As Justin’s fans the beliebers anxiously await the release of the movie his team and Paramount Pictures  released the movie’s poster above for the movie.

In the poster Justin seems to be standing between two worlds Canada on one side in black and white and New York City on the other side in color.  The tagline for the poster is “Find Out What’s Possible If You Never Give Up.”  So I believe the poster is depicting Justin’s rise from small town boy to where he is today – his path to success.  What do you think of the movie poster?  Will you see the movie?  Below is the trailer from the movie for your enjoyment!