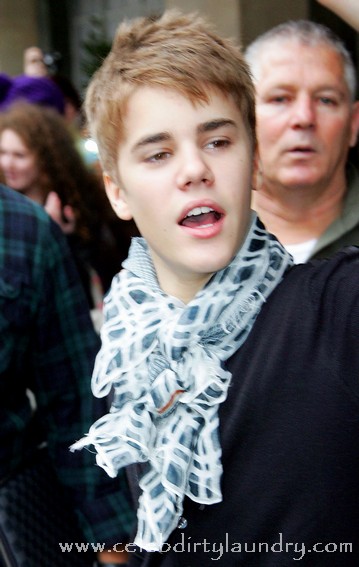 Justin Bieber has flipped the middle finger again, at least according to Hollywood Life.  Bieber, who is hard at work in the UK, may be stressed out and this display might cost him negative publicity.

Bieber, 17, has been spotted getting a bit frustrated with the paparazzi as of late.  Justin, being one of the biggest stars in the world right now, hasn’t been able to go out in public without a mob attacking him in months.  Fans can only image how stressful it must be to work extremely hard at your career, still have to maintain school work, friends, and family life, not to mention dating.  As Justin is dating another high profile star, Selena Gomez.

While Bieber’s behavior hasn’t ever been really bad – at least by celebrity standards and it does seem that the “Baby” singer may be getting fed up with all of the paparazzi, security, and fans smothering him all the time.  He’s still very young, and all of this attention is great, until you want to do something private.  Justin is basically handling the pressure really well.

When I think of the things my friends and I did when we were 17 Justin seems like an angel by comparison.  In fact by Hollywood or regular standards Justin Beiber is doing just fine.  Let him flip the finger – big deal – as long as he doesn’t do it when he is with the Royal family.  We don`t want an international incident!