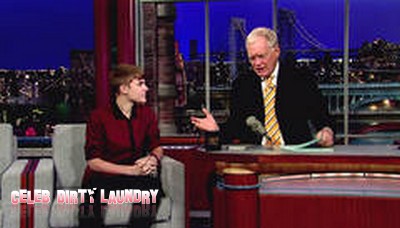 We are not implying that Justin Bieber is stupid but as a Canadian shouldn’t he know that Canada is part of North America? In any case, the world’s most popular singer was unable to name all 7 continents on his home planet when asked during a taping of David Letterman. For those you who are also confused by this geographical question we conveniently provide the answer in ascending order of size: Austalia, Europe, Antartica, South America, North America, Africa, and Asia.

Justin struggled to name the continents on Letterman, requiring clues to remember Europe and even offering the North Pole and Canada as wrong answers.

Justin hasn’t had much time for school since becoming the planet’s teen idol and after boasting to Letterman that his singing career had taken him to “every continent” he was asked by the glib host to itemize them. Yikes!

Talking about his music career, Justin told David: “I love it. I have a blast. I get to travel the world. I think I’ve been to every continent.”

At which point David asked Justin: “How many continents are there?” David was trying to give Justin an easier question, he thought, than asking for the names of each continent.

But rather than answering with a number, Justin confidently began to name them, saying: “Asia, North America, South America, erm, Africa, Antarctica and the North Pole.  Err, Canada.”

David interjected: “There are two more, come one. These are easy ones. You’ve been to both places.”

Justin replied: “Oh, Australia. And the last one is…”

To fill the silence, the host then provided a clue: “I’ll give you a couple of countries in the last continent – France…”  Finally Justin started to grow a brain and said enthusiastically: “Europe!”

Do most people know how many continents there are?  Can they name them?  My bet is that Justin’s answer was no worse than average. What do you think?   Sound off in the comments below.