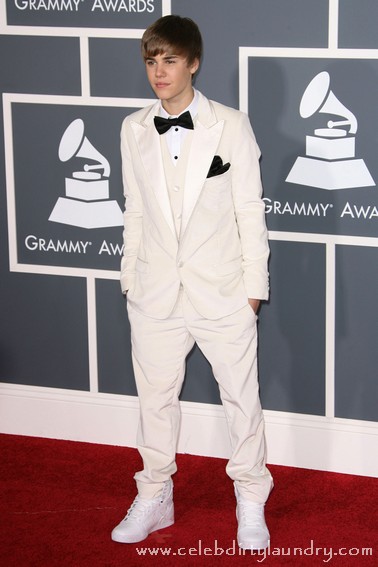 Justin Bieber has joked that he found Lady GaGa’s meat dress and recent Grammy arrival inside an egg to be “weird”.

Justin Beiber had some cool comments on arch rival Lady GaGa’s attire and some insight as to why the Lady might have arrived in an egg to the Grammys.  Bieber performed at the Grammy’s on Sunday, although he walked away empty-handed after losing out to Esperanza Spalding in the ‘Best New Artist’ category and to GaGa in the ‘Best Pop Vocal Album’ field.

GaGa wore a dress made from cuts of raw meat to the MTV VMAs last year, and arrived on the Grammys red carpet this week encased inside an egg-shaped contraption.

During an appearance on E!’s Chelsea Lately on Monday, Justin was asked whether he preferred the meat outfit or the egg. “I thought both were weird!” he laughed. “But I don’t know… People say it’s artistic or stuff. I’m just like, ‘You’re an egg!'”

However, Justin went on to suggest that GaGa might have decided to encase herself inside an egg to protect her voice ahead of performing.  “Maybe she didn’t want to talk to a lot of people,” he said. “A lot of people before they go on stage are on vocal rest.”