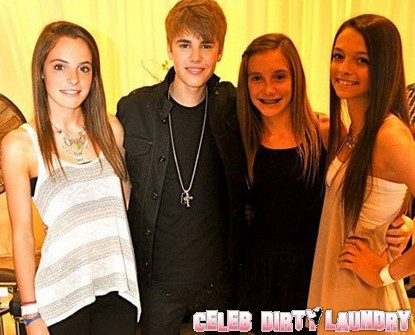 Last month, President Obama met a young girl who lost her family in the attacks on September 11, 2001. He then made a promise to the fan that he could arrange a meeting with her idol, Justin Bieber.

The President called up Justin and set the plans in motion for the fan meeting.

The fan, Payton Wall, got to meet Justin on Thursday, right after his riot at Macy’s. She posed with the teen singer, along with her sister Avery and their friend Madison in the above photo.

Payton commented that she was more nervous about meeting Justin than she was with meeting the President. Crazy, right?

At least the President has kept his word on that and has made her one happy fan. Good for Payton and her friends. Now, can the Prez honor his word to the nation and pull our troops out of Afghanistan and other places already?

It’s time he delivered on the bigger picture, right?