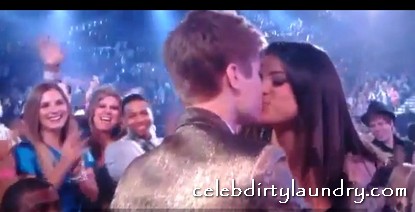 Justin Bieber, wearing a shimmering gold and black dinner jacket, made a point of not making a big deal of his date for the evening – Selena Gomez – as he accepted his awards at the 2011 Billboard Awards, thanking his mother, who was sitting right next to his girlfriend, but not the Disney star.

But, not making a big deal during the acceptance speech really did not matter.  When Justin’s name was called as the winner he got up surprised and planted a big kiss on Selena as you can see in the picture above.  Poor Selena had  a tiny problem with her dress as she stood the black revealing Dolce & Gabbana took a little slip and either her white granny panties or her white slip was displayed for all to see.  Not a great choice of colors for her undergarments.

Justin was one of the big winners of the award show last night with an impressive haul of eight included trophies for Fan Favorite, Digital Artist, New Artist, Digital Media Artist and Pop Album (My World 2.0).  Checks out all our pics of the Red Carpet Arrivals at the 2011 Billboard Awards HERE!