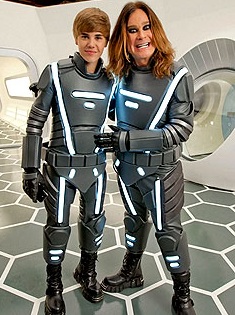 Teen heartthrob Justin Bieber, 16,  and Ozzy Osbourne, 62, will be appearing in a Best Buy ad at the Super Bowl.  What a brilliant move on the part Best Buy.   Justin Bieber is every teen girl’s fantasy so with him appearing on an ad for Best Buy on the Super Bowl you know they are all going to be tuning in too see it.

According to Drew Panayiotu, Best Buy’s senior vice president of U.S. marketing, the Osbourne-Bieber commercial will “showcase creativity and humour,” and that the two will go beyond viewer expectations by adding “a whole new dimension of fun” to the ad.

The Biebs tweeted to his followers: “Can’t really say what I’m up to today but when u guys find out its gonna be funny as heck,” later adding, “#todaywasepic.” Then on Wednesday, he spilled the beans a bit, admitting to filming a “pretty funny commercial” with Osbourne, 62.

Can’t wait to see it what an interesting combination ‘The Prince of Darkness’ and the “Prince of Hearts’ :-)