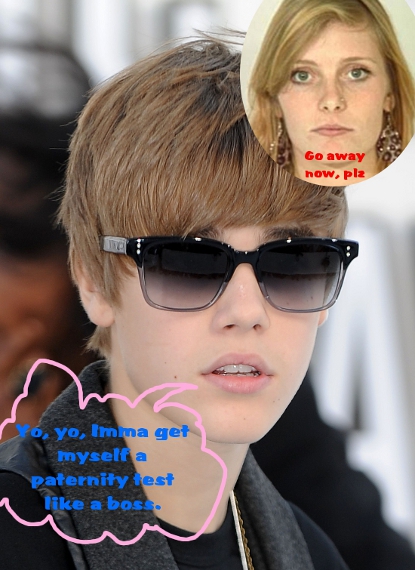 Justin Bieber has already denied — several times — that he’s not the father of Mariah Yeater‘s 4-month-old baby. Even though Mariah has dropped the lawsuit against the singer, she continues to claim that The Beebz is her baby’s daddy. And Bieber is getting fed up with it all. So he’s agreed to just take a freakin’ paternity test. Finally!

In an interview with EXTRA last night, Bieber’s lawyer said:

Well, he seems pretty confident that the baby isn’t his. Wouldn’t that be just absolutely horrible if it actually was his baby! That would be the biggest oopsy-daisy of the year. Boy, we’d have fun with that one, wouldn’t we?

Just for the record: We don’t think the baby is his either. We have a sixth sense when it comes to this type of thing. His lawyer says:

We’ve never even seen the lawsuit, but we’re going to just get ahead of this thing and go right after it. I think it’s important to hold people accountable for their actions. We don’t want it to seem like it’s OK for everyone to say, like, ‘I had Justin’s baby or having his baby.’

Justin previously revealed that he would take a paternity test if his legal team wanted him to do so, but that he wouldn’t bother taking the time to confront Mariah Yeater.

I wouldn’t waste my time. I guess [she’s done this] for attention, but it’s not something I am interested in. These people are not worth my thought or time.