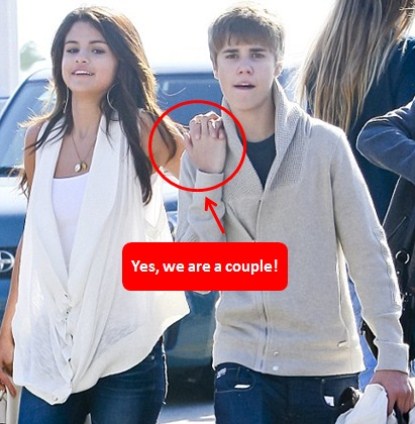 People have been speculating for some time now that Justin Bieber, 16, and Disney star Selena Gomez, 18, have been dating.  Rumors first started in November 2010 but they said at the time they were just friends.  Since then neither camp has confirmed this inspite of the fact that they have been pictured together on many occasions.  But as you can see in the picture above taken at the Santa Monica pier as they stolled hand in hand the two definitely are dating.  They followed the stroll with a romantic dinner at The Ivy.

When asked by a fan recently if he was dating her he said ‘I think anyone would be lucky to date her. She’s a great person.’

They look adorable together!  He is going to be 17 in March so there is not a huge age difference.  I am guessing they are not confiming the romance because when Kim Kardashian was linked to him she received death threats from his fans. (even though they were not in a romance)  Another reason I am sure is that the people managing him want him to be single so all The Beliebers will not get upset!  What do you think of the romance?  Will having a girlfriend lose him fans?