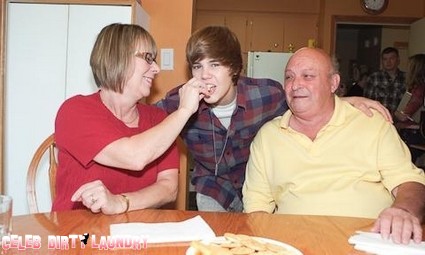 Justin Bieber‘s grandparents have been involved in a nasty car accident in Canada.  Their vehicle was written off but the pair survived. Details are sketchy at this stage. Bruce Dale  – his maternal Grandfather – has several broken ribs. There are reports his grandmother Diane Dale escaped unhurt.

The teen star is very close to his Mom Pattie Mallette‘s parents. They helped raise him when Pattie became a single Mom. Bruce and Diane have been there every step of the way as he went from YouTube sensation to teen idol to worldwide superstar. They also featured in his doco Never Say Never talking about how they always knew their grandson was destined for greatness.

Pattie Mallette confirmed the accident on Twitter ‘My parents got into a car accident today. They flipped into a ditch & totaled the car but thank God they are alive! My dad has broken ribs. Plz pray 4 him 4 quick healing! Count your blessings & forgive ur parents always. U never know what tomorrow holds!!!’There’s been no statement from Justin or his management regarding the crash.

The family will be feeling the love on social media. Within minutes of the news breaking several hashtags were trending worldwide on Twitter including #PrayForJustinsGrandparents and #BruceAndDiane. Messages of support and good wishes are also being tweeted from all over the globe. Then there’s the outpouring of love on the Bieb’s Facebook page and numerous fan sites. Young girls praying Justin’s family are OK.

Our thoughts are with Justin, Pattie and the family at this time.