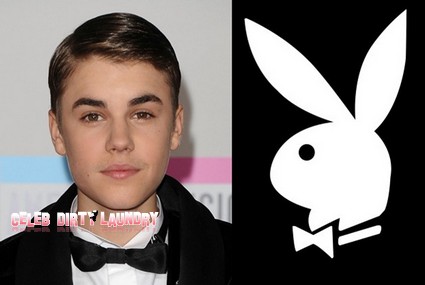 Justin Bieber is currently dating Selena Gomez, but if he gets bored with her, he can spend all of his time in a mansion filled with nothing but women, in some of the most revealing clothing!

According to MSN: “He (Justin Bieber) actually has permission to show up whenever he wants. He’s invited to every party and he even visits just to hang with Hef.”

The only logical reason why he’s even allowed in there is because he’s famous because we all know that if he was a nobody and actually went up to the Playboy Mansion they’d think he was some new girl, cause he looks like a masculine lesbian.

Yes, I am jealous. Hell!  Every man in this world is jealous, but the thing is, Justin has a perfectly good looking girlfriend appropriate for his age. I don’t see the reason why he goes there and I really wonder how Selena herself feels about this, seeing that her underage boyfriend wants to hang out with Hef and the girls at the Playboy Mansion.

So in conclusion, I think Justin Bieber is just doing this to look “cool.” Just because he’s underage and has full access to the Playboy Mansion he might feel like a “bad ass” but in reality everybody still makes jokes about him.  In fact, I do hope eventually Selena and Justin break it off, since Selena is too good for her him.