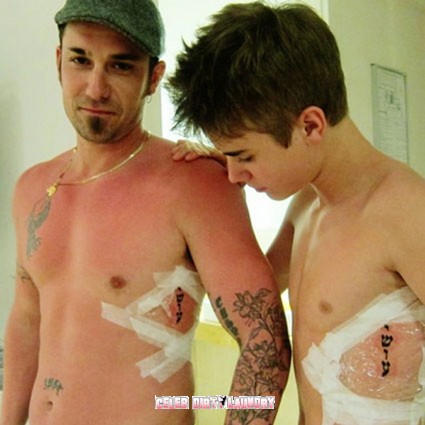 The say the apple doesn’t fall far from the tree and when it comes to tattoos Justin Beiber appears to be following in his dad’s footsteps. Young and beautiful Justin has a taste for ink – and like any good lad he wants to impress his father. This makes for a situation in which we can expect Justin to become increasingly covered with tattoos.

Justin’s most recent tattoo, ‘Yeshua,’ in the Hebrew alphabet, which happens to be the Hebrew name for ‘Jesus’ hit the web when photos were released when he hit the beach with Selena Gomez in May.

Now take a look at how ‘Jesus’ might look in 20 years, because his dad Jeremy Bieber has the same tat.

Its heartwarming that Justin and his dad are so close but perhaps Justin should take it easy on the tattoos or else he might wind up all tatted up like his dear old dad.