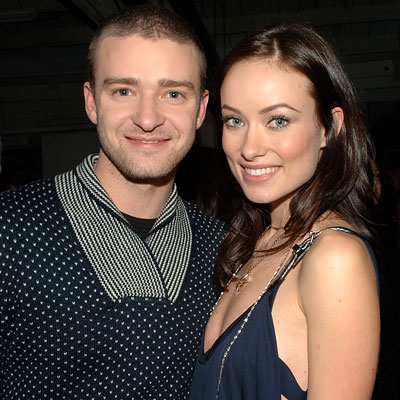 Less than a month after announcing his split with his girlfriend of four years, Jessica Biel, Justin Timberlake stepped out with another young Hollywood beauty, Olivia Wilde.

The Now costars hit The Roxbury on Hollywood Saturday night, and snuggled together in the VIP section until 1 a.m., when Timberlake, 30, requested they move to the patio so he could listen to hip hop.

Wilde, 27, who in early March filed for divorce from her husband of eight years, Italian Prince Tao Ruspoli, has recently been spotted with Ryan Gosling.   Nevertheless on Saturday, she seemed perfectly in love with Timberlake.

The couple arrived at the club together and both were wearing white T-shirts and jeans – they both drank vodka.  They also left together at 3 a.m.

Sources say they looked like they were on a date.  Yes – well it would have been a strange time and venue for a business meeeting.