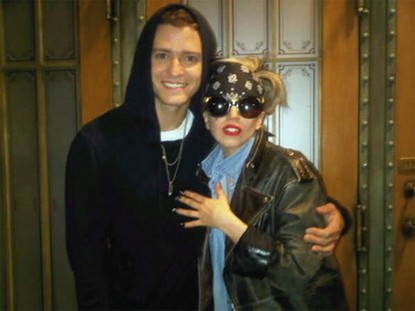 If you’ve never seen Justin Timberlake and Saturday Night Live’s Adam Samberg perform their hit skit, ‘d**k in a box’ – well you just don’t know what you’ve been missing!!  The skit instantly became a youtube hit, with fans of both JT and SNL asking for more.

TMZ has reported that Justin is ‘brining back his famous chin-strap sportin’ alter ego for a new skit this weekend’. Um – Yay and about time!

An SNL crew was spotted filming the two boys in their cheesy sunglasses and 90’s suits in front of an NYC building.  Need we say more?  Well, it just so happens the lovely and talented Susan Sarandon was also on set…just saying.  Oh what spiciness she could bring!!

Well, come on – Justin is set to host this weekend, with Lady Gaga as the musical guest. Wow, should be a real boring show…. Do you think Gaga will make a cameo with the boys?  My fingers are crossed!!!