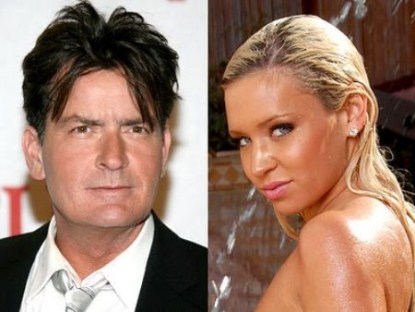 Charlie Sheen enjoyed the company of several prostitutes recently and one who has been making the headlines, Kacey Jordan recently underwent an abortion, and says that the baby could have been his.

Kacey hooked up with Charlie during his most recent coke/booze/prostitute binge – the one which ended in a trip to the ER, the suspension of his show, ‘Two and a Half Men.’  Kacey has admitted the couple did not use contraception and so when she discovered she was pregnant, she thought Charlie was very possibly the father.

“I had the abortion last Thursday, I went home to Oregon to have it because that is where I grew up. I was sick and on the couch all day,” said Kacey, who has already terminated three previous pregnancies. Can someone please terminate her?

“I think it might have been too soon to be Charlie’s baby, but you never know. I get pregnant very easily. Charlie and I tried to use protection – I kept having to put it on again. I don’t want people to think I just had sex with him and didn’t try to use one.” People think you are a rapacious whore, Kacey, what else could they think?

“I was just impressed he was able to finish really.” Kacey was impressed, how nice.  “A week earlier I had been with another celebrity, so it could of been his, but I can’t talk about him because I had to sign a release.”

Kacey, who has alcohol problem herself, relived all the details of the wild night in January she had with Sheen telling about his fantasies, drug problems and sex addiction.

“When I arrived at his house he was already really drunk. He opened the door and he was standing there with his eyes half shut and his gold teeth, not at all the guy you think of from TV. He was just really drunk walking around his house with his eyes shut drinking.”  “The drugs didn’t even come until the following morning, and then we had sex after he had the drugs. I was really proud of him, I couldn’t believe he could do it.”

“There were four other girls there that night. Two were porn stars who are new in the business and the others were just their friends, just regular civilians; that’s what we call people in the porn industry who aren’t in it.”  “Then there was his assistant Rick and then the guy that showed up in the middle of the night with the cocaine. Wow, this cocaine was the purest thing ever, there was no filler at all. I actually got scared I might overdose at one point.”  “He kept throwing a ball of cocaine in my handbag and saying, ‘take it’. I kept taking it out. The the next day there were just chunks all in my bag.”  “When I left I thought he was going to pay me $5,000 and then he said, ‘here, how much do you want?’ I just stood there and he offered me $25,000 and again I just stood there and then he said, ‘no lets make it $30,000’.”  “He spoke about offering me this lifestyle,” she said. “But I knew it wasn’t going to happen. He kept offering to give us cars.”  “We still haven’t spoken to each other on the phone but we texted on Valentines day. I asked him if he was ok and he just asked the same back.”  “I’m afraid if he is not working he will be home doing more drugs, so he needs to be back at work.”

Yes my friends – it is a brave new world indeed.