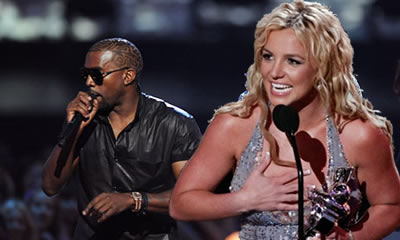 Kanye West is taking his hijacking to a new level!

Kanye suffered a lot of criticism after hijacking the stage from Taylor Swift at the 2009 Video Music Awards — and rightfully so. He came off as a pretentious douchebucket when he stole her moment. Since, he has apologized over and over for his outburst. Now, it’s good to know that he has a sense of humor about it!

He took to Twitter to tell Britney Spears this little gem, “Yo Britney, I’m really happy for you and I’mma let you be #1, but me and Jay-Z single is one of the best songs of all time! LOL”

Nice. What’s even better is her team’s response. Her manager, Adam Leber, tweeted, “@kanyewest Thanks for “letting” us be #1. Much appreciated…. -Adam Leber, Manager”