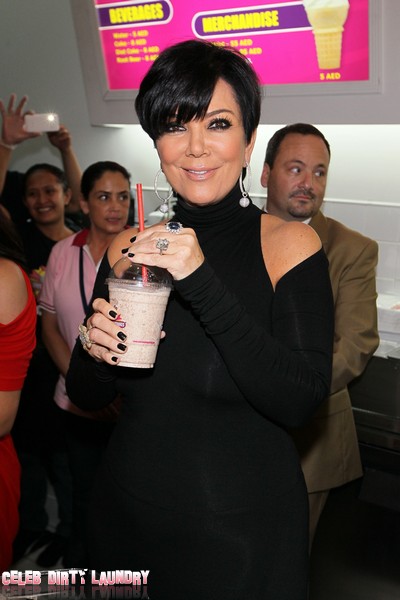 The Kardashian Klan with Kim at the vanguard are protesting much too strongly that they did not profit from Kim and Kris’ high-profile wedding. The whole gang of Kardashian’s are claiming that the millions of dollars they received for marketing and merchandising the wedding were spent on the ridiculous $10 million extravaganza.

But as TMZ points out below spending money you bring in does not mean that a profit was not earned… .

The Kardashian family is screaming it from the mountain tops — trying to convince the world they DID NOT PROFIT from Kim’s ill-fated wedding … but there seems to be a problem with their logic.

Kris Jenner appeared on “Today” this morning … and said, “It saddens me to think that one of the rumors is that we’ve sold the television rights for millions of dollars, not true. We profited or she profited – absolutely false.”

Jenner’s statement follows a stern blog post from Kim — in which she also stated, “There are also reports that I made millions of dollars off of the wedding. These reports are simply not true and it makes me so sad to have to even clarify this.”

This morning, Kim appeared on the “Kyle and Jackie O” show in Australia, and once again insisted she didn’t marry for cash … saying, “I would never marry for a TV show, for money, for anything like that, and I think that’s really ridiculous that I have to even, you know, kind of defend that but, you know.”

Still, Kris admits K&K, “made some money for the pictures that were sold and things like that” …but says the family didn’t profit, because all of that money went back towards paying for the wedding.

But here’s the problem — most people can’t afford a $10 million wedding, and if Kim chose to pump her MASSIVE paychecks back into her wedding, that’s her call … and it STILL COUNTS AS PROFIT. Kim could have had a $6 mil wedding … and banked $4 million.
And let’s not ignore a key factor here – Kim’s wedding and subsequent filing for divorce have provided the Kardashians with many many millions of dollars worth of publicity. Since they all earn their keep through entertainment and celebrity merchandising/marketing can they really think that we are stupid enough to accept the lie that they did not profit from the wedding?