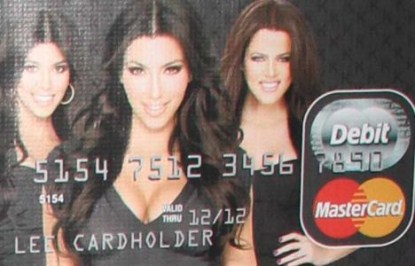 The Kardashians have earned $65 million in the four years since their Bravo show ‘Keeping Up With The Kardashians’ went on the air.    But according to the Hollywood Reporter they would be worth a lot more had their recent sponsoring of a credit-card deal not dissolved.

The magazine analyzes the reality-TV family’s earning power from media, Twitter and product deals.  The credit card deal they struck in November with Mobile Research would have netted them $3 for every card activated, 25 percent of fees rung up by cardholders, a $75,000 advance on royalties and a $37,000 signing bonus.

Luckily their mother, Kris Jenner, had the sense to look a little deeper.  Once she discovered that all was not kosher with the deal she tried to quietly kill it.  It seems that the prepaid “Kardashian Kard” received flak from then-Connecticut Attorney General Richard Blumenthal about hidden fees, which he called “predatory.”  Family lawyer Dennis Roach announced the Kardashians were pulling out of the two-year arrangement and they were handing the advances back.

In January, the card issuer, Mobile Research, sued the family for $75 million for breach of contract.