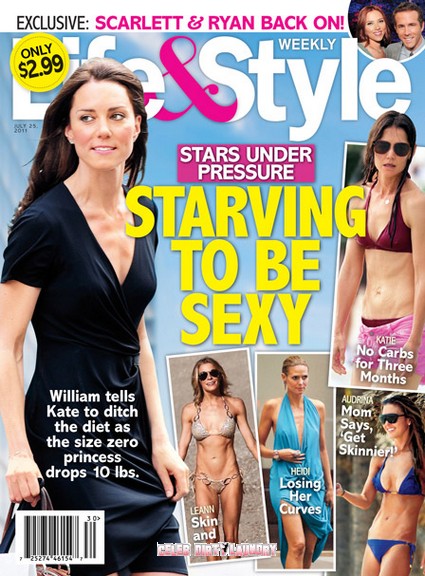 Kate Middleton now known as Catherine Duchess of Cambridge has been disappearing since it was announced she was too marry Prince William.  Once a healthy looking girl she has dropped to a size 0.  It seems that constantly being in the public eye is really starting to get to her and the stress is making her drop weight.  It must be difficult having people watch every single thing you eat and I can see how it might make her feel self conscious.

A friend revealed to Life & Style: “but there’s no way she’s more than a size 0 right now — and that’s extremely skinny.  Kate was pretty skinny on her wedding day, but now pals are saying she’s dropped another 7 to 10 pounds.”

During the newlyweds trip to Los Angeles, celebrity chef Giada De Laurentiis cooked up an extravagant meal for the couple and their guests at the Santa Barbara Polo & Racquet Club-but Kate barely touched any of her three-course meal. “Vegetables, salad, lasagna and seafood were served at the luncheon,” an eyewitness tells Life & Style. “She picked her way through it. She’s dainty and demure, and I doubt she felt comfortable in that setting — there were thousands of people staring at her.”

Kate won’t have to go through this alone her husband Prince William watched his mother battle with bulimia from the intense pressure of public life.  I am sure he is keeping an eye on her.   What do you think is Kate to thin now?  I think she looked so much more healthy prior to marrying William.