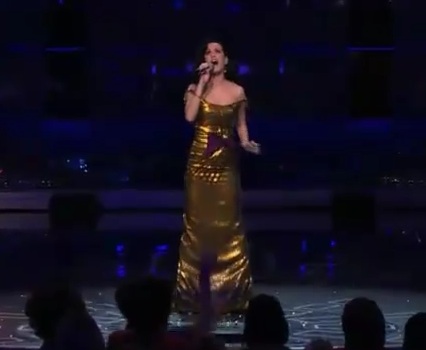 Although the two didn’t walk down the red carpet together on Sunday night, the always charming and beautiful (respectively) Russell Brand and Katy Perry were finally reunited yesterday and seen out and about in LA.  Questions were being posed after Russell brought his mom as his date to the Oscars on Sunday (he was presenting the Best Foreign Language Film with Dame Helen Mirren), all inquisitive minds were wondering, “Where, oh where was Katy?”.  Not to fear fans, the lovely Mrs. Brand was out of the country on her world tour but flew back early Monday morning from Vienna to make a surprise appearance for Oprah’s post Oscar show in Los Angeles.

The stunning singer, wearing a floor length gold gown (with an awesome big purple bow that really made me just want to open her up like a nice shiny present!), flew 13 hours just to surprise the audience and sing alongside the PS 22 children’s choir from Staten Island who also performed at the end of the Oscars.  The song opened with the children’s rendition of Perry’s hit single ‘Firework’, only to have the curtains rise behind them where the shimmering beauty made her grand entrance and her voice floated through the Kodak Theater.   The show spared no expense (it is the Kodak after all) and even included a magnificent firework display at the end of the song, where Katy was shortly surrounded with huge hugs from all the children.  I’m not ashamed to admit (yes, I tweeted it), that the whole performance brought a wee tear to my eye.  Not that it’s like that’s never happened on Oprah mind you, but seeing the kids performance, mixed with the magic of the song and Katy’s voice – who wouldn’t feel a bit choked up?