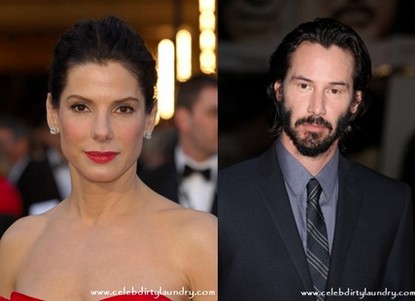 It seems that Sandra Bullock was distraught over the news that her creep of an ex-husband, Jesse James, wrote a tell-all book, “American Outlaw,” and only Keanu Reeves was able to ease her fears and calm her down.  “Keanu was her rock,” a close pal of Sandra said.

As reported, Sandra was consumed with fears that all her secrets would come spilling out under the guise of Jesse’s “memoir.”  “Keanu spoke to her for hours, night after night, listening to her worries, as she poured out her heart over her frustration and pain,” said the source.

“And in the end Keanu gave Sandra the courage to move on and hold her head high.  He basically told her Jesse’s cooked-up stories were just that.  He soothingly reminded her that she really had nothing to fear because she was respected by everyone close to her including him.  He assured Sandra he’d always be there for her… .”

“After Jesse’s cheating scandal erupted, Keanu became Sandra’s shoulder to cry on,” said the source.  “They’ve always professed a great mutual respect and affection for each other.”  “The first person she turned to was Keanu, and he proved he was a true-blue friend by being there for her.”