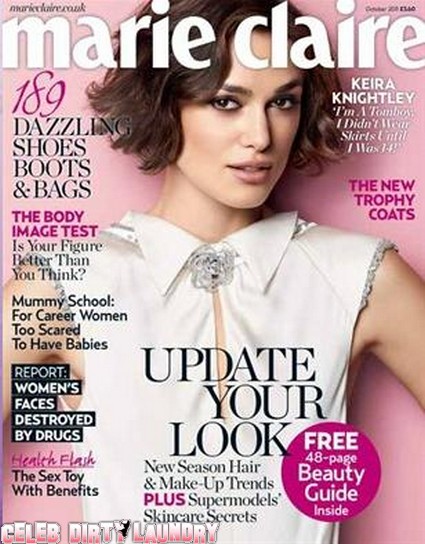 Atonement star British actress Keira Knightley, 26,graces the October 2011 cover of Marie Claire.     In the interview Keira told the magazine she has a six sense and she can smell sexual chemistry right away.  She has an almost animal instinct.   Keira was speaking to Marie Claire magazine and said: “I think you do know if there is sex in the room — you pick up on chemistry between people.”

Keira said she leaned towards the artistic types when it came to friends and lovers.  She said: “I have a mix of both — great guy friends and girlfriends.  I have one girlie girlfriend but I’d say my girlfriends are more boyish. And I suppose the guys aren’t great jocks, they are sort of artistic and tend to be directors or writers or musicians or actors. The boys have a sensitive side.”

Keira who traded in boyfriend of five years Rupert Friend for Klaxons star James Righton earlier this year says she used to be fascinated with boys.  She said: “I’d go with boyish chic.  Growing up I was a tomboy. I didn’t wear skirts until I was 14. I hated them. I love a man’s shirt.’

Keira was in Venice over the weekend to promote her latest project A Dangerous Method at the 68th annual Film Festival.

To catch all the interview pic up the October copy of Marie Claire which hits stands this week!