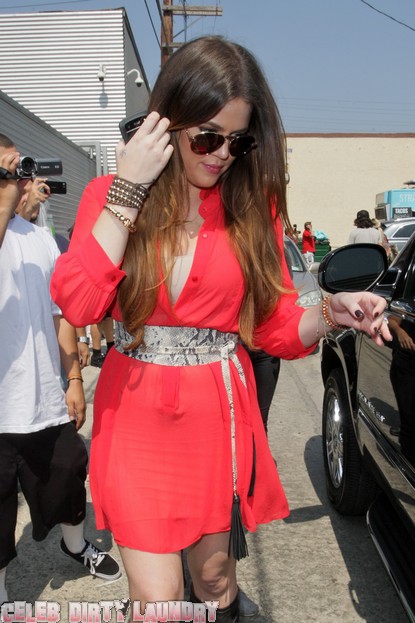 Khloe Kardashian is not at all impressed with the judges on this season of Dancing With The Stars!

After her brother Rob and his partner Cheryl Burke did their Viennese Waltz, the judges gave him the low-down on his performance. From our official recap last night:

Rob Kardashian and Professional Dancer Cheryl Burke dancing The Viennese Waltz. Carrie Ann said, she does not know what Bruno was thinking, when she watches him she sees potential. He has to let it flow a bit more. Len said, I am not depressed, but I am not impressed, you are too careful. You have come out and let it go. Bruno said, you danced that waltz like you were under orders to succeed; you have to take control, no musicality at all. You have to perform.

Rob was a bit stiff in his performance, but he was no Fred Astaire, either. It miffs me to no end that these reality show twits are so self-entitled that they think they are untouchable. Khloe even went as far as cussing out Bruno Tonioli (who happens to be famous for having actual talent)!

Khloe tweeted after the show, “I can’t believe I yelled at Bruno to clean his ears! LOL. Team Rob all the way!!!!! Let’s go Rob!”

So, he needs to clean out his eyes to judge a dance differently? Someone needs to go back to school — or at least pick up a book and READ THAT MOFO.

Later on, it appears that Kim’s tears on the show went unnoticed, so she had to famewhore her appearance out on Twitter, as well. She tweeted, “Did u guys watch Rob tonight on DWTS? I cried, Kourt almost had a heart attack & Khloe cussed out the judges! #Typical”.

Good news for Rob, though, he didn’t suck as bad as Ron Artest or Nancy Grace, so he’s likely to get a few episodes under his belt. What did you think of his performance last night? Did he get your votes? Sound off in the comments!