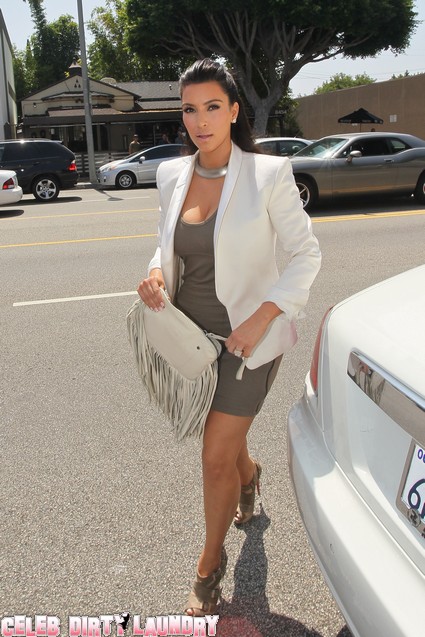 It seems that the wedding is still on for later today between Kris Humphries and Kim Kardashian, but Kim’s bitchy side was already out in full display last night at the wedding rehearsal.

The two K’s had a big fight after a three-hour wedding rehearsal last night. It seems that Kris was in a good mood and pretended to attack a group of paparazzi with several of the obnoxious ‘Kim Loves Kris’ wedding handbags.

The incident took place after the couple arrived home from the rehearsal dinner at the Montage Hotel in Beverly Hills.  Kris was just kidding around and everyone knew it – but that didn’t stop Kim from going on the attack and snapping ‘Why did you do that’ at Kris.

Then in a demonstration of what Kris has to look forward to in a life with phony selfish Kim, she stormed up the steps and out of site – obviously in a sulking fit. Kris followed like the whipped dog he will soon become.

Let’s not forget that Kim lives for attention and wants the paparazzi favorably inclined towards her at all times. I say that Kris Humphries is crazy to marry Kim. Would she have picked him to marry if his name didn’t start with the letter ‘K?’