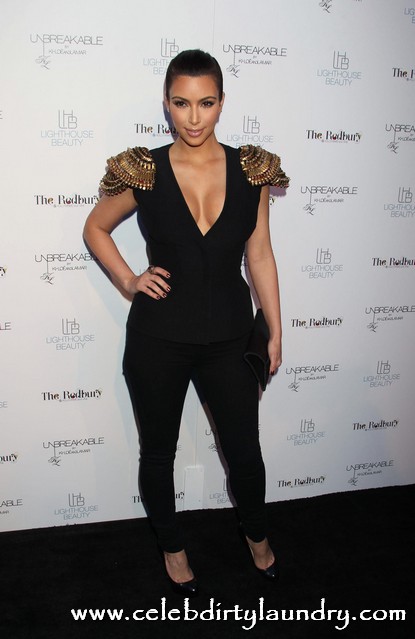 Kim Kardashian decided to come as her own embodiment of Sylvester Stallone’s Judge Dreed character – but with breast implants – as she debuted her perfume at The Redbury.

The socialite evoked memories of the futuristic outfit made famous by the 2000 AD comic book law enforcement officer.   Though there were several key differences between Kim and Dredd.   For starters, the crime-fighting hero never flashed any cleavage in his get-up.   Kim wielded a handbag rather than a machine gun and nattered on a mobile phone en route to the Unbreakable perfume bash at The Redbury.

Meanwhile, the curvy brunette has revealed she missed out on the chance to meet her idol Elizabeth Taylor shortly before she died last month.   The duo had been paired for a feature in the magazine Harper’s Bazaar, which required Kim to interview the screen legend.   She said: “We had a tea set up for me to come over to her house and have tea and then she got sick and they postponed it… so I never got the chance to meet her.”