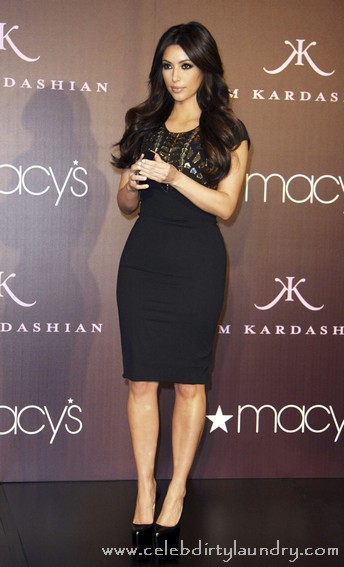 Kim Kardashian, 30,  launches her new self-titled perfume at Macy’s Glendale, California yesterday February 22nd, 2011.  Actually Kim’s perfume was launched more than one year ago but Kim is having a relaunch.  Maybe she is trying to remind perfume buyers that hers was the first before her sister Khloe Kardashians.  Khloe recently released a perfume with her husband Lamar Odom and in the ad the two appear naked.

So is their trouble with the Kardashian sisters?  Is Kim jealous of Khloe’s new perfume.  It would not be the first time the sisters have clashed over perfume.  On their show Keeping Up With The Kardashians three years ago Kim announced with her mother that she was going to launch a perfume and name it Dashing after their LA clothing boutique Dash – Khloe and older sister Kourtney were furious.  So to appease her sisters, Kim ended up naming her fragrance after herself.  What do you think?  Have you tried Kim’s new perfume?