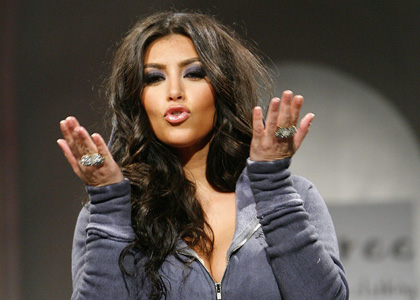 Kim Kardashian made a scary prediction that had many of us shaking with shock and horror – she thinks her family’s reality shows could go on “for years.” Even a bad flu season or a slump in the market tend to end and allow us some relief – more quickly we fear than Kim predicts her family’s shows will expire. Imagine 10 years from now watching as Kim gets another butt lift and files for divorce from her sixth or seventh husband? I know, you’d rather not!

The 31-year-old talentless harpy thinks her teenage siblings, Kylie and Kendall Jenner, will start to play more prominent roles in the reality TV programs such as ‘Keeping Up with the Kardashians’ and other spin-offs but believes there will always be a place for her and her other siblings.

Kim told the Hollywood Reporter: “These shows could really go on for years.  There are so many of us, but I think we’ll see more of my younger siblings [Kendall and Kylie].”

Meanwhile, Kim’s mother Kris Jenner says she is “proud” of her family for their achievements this year, which included son Rob coming second on ‘Dancing with the Stars’, Kim marrying Kris Humphries – though they split up just 72 days later – and daughter Kourtney getting pregnant with her second child. Of course Kris Jenner also announced with pride to the world that she fooled around on Kim’s dad, the lawyer Robert Kardashian, while she was married to him. So who can take anything she says seriously – she is obviously responsible for the core of Kim’s mercenary famewhore character.

Kris said: “I’m really proud at how hard we’ve all worked this year and what we’ve accomplished.  We roll as one big unit, so whether something’s sad, happy or tragic, we come together as a family and everything falls into place.”

It was recently rumoured that Kendall, 16, and 14-year-old Kylie would land their own show, while Rob has also been linked with a program of his own as well.

When the Kardashian/Jenner family serves as the model for the American family it’s time to close the TV.